Under the current circumstances some of you may be self-isolating and thinking about all the lovely places that you would like to visit when the time is right for us to venture out again.  We thought you might enjoy a little look around some of the great day out North Yorkshire has to offer. All these amazing places are a short drive from Gallaber Park our 5* park in Long Preston near to Skipton.

North Yorkshire offers many unusual family days out.  This beautiful county is  home to The Forbidden Corner – dubbed “The Strangest Place in the World”, there you’ll find all sorts of curious things from pagan tree men, to haybale dogs, and a huge pyramid made of translucent glass! Then, there’s Castle Howard with its fantasy themed play area, Skelf Island which was ranked amongst the best adventure playgrounds in the UK .

If large open areas and acres of stunning gardens sounds like the perfect day out, visit Fountains Abbey and Studley Royal, or explore the mysterious remains of the gothic Whitby Abbey and find out how it inspired Bram Stoker’s Dracula.  And for the  thrill seekers – Lightwater Valley. with 35 exciting rides, lots of seasonal events, plus a choice of indoor and outdoor play areas it’s one not to miss!

Here are a few of our favourites for you to enjoy in North Yorkshire. 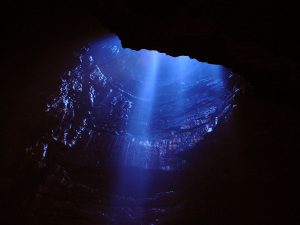 Is the Largest underground cave chamber in Britain.  It’s said, without exaggeration that this dramatic chamber is big enough to fit a cathedral in. It is so big there has been an attempt to fly a hot air balloon inside the cave.

The vertical main shaft from the surface to the floor of the chamber is about 98m deep and normally contains a substantial waterfall, the route by which the surface stream, Fell Beck, finds its way to the chamber floor.

Once inside you can just explore the chamber, or the slightly more adventurous can enter some of the easier and closer passages of the 16.6km cave system. It’s a good idea to wear waterproof clothing as the winch passes you through the spray from the towering waterfall.

The path starts as an easy stroll but gets more strenuous after passing the entrance to Ingleborough Cave (a commercial show cave, itself worth a visit). This includes a spectacular, but steep, limestone gorge called Trow Gill. The walk to the top will take about an hour but the spectacular scenery makes it worth it. The floor of the main chamber is very wet, so waterproof boots are advisable. You can rent helmets and lamps in the nearby village of Ingleton if you want to explore more. 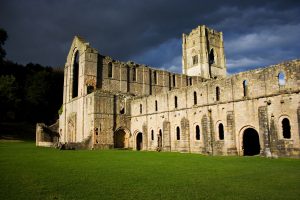 The ornate religious complex known as Fountains Abbey remained in active use for over 400 years and miraculously continues to stand in much its original form despite being denounced in the 1500’s.

The 70-acre site known collectively as Fountains Abbey was originally nothing more than some wooden church buildings resting on a verdant field. The abbey was slowly expanded and converted to stone across its centuries of use, experiencing fires and destruction from religious opponents, each time rebuilding the abbey a bit greater. At its height, the church complex was the largest and richest abbey in all of England, yet it was so large that it was also known to be in varied states of disrepair as no one seemed to be able to keep up the maintenance of the aging complex. It wasn’t until Henry the VIII ordered the dissolution of all monasteries in the 1500’s that the abbey finally shut down.   While it is a popular tourist spot, it is also often used in television and film projects.

This limestone ravine holds the type of beauty that lingers in your mind long after you’ve passed through. Carved by glacial melt over millions of years, the Gordale Scar is at the northern end of Craven Fault, a 22-mile fault line that runs from Cumbria to the Yorkshire Dales. This gorge’s true size is only appreciated once you walk through the desolate valley and turn the corner into the Scar itself. If you continue traveling through the shadows of the overhanging limestone cliffs, you’ll be rewarded with two waterfalls hidden just around the corner. The water pours over large clunky boulders in its powerful – yet also rather peaceful cascade. During calmer weather, you can even climb the waterfalls to reach the top of the cliffs, which will reward you with a truly magnificent view.

The strength and beauty of the waterfalls has been immortalized in art. William Woodsworth waxes poetic about them, writing, “Let thy feet repair to Gordale chasm, terrific as the lair where the young lions couch.” They’re also featured in James Ward’s famous painting Gordale Scar, which is currently stored in the Tate. In addition, Gordale Scar itself was a filming location for Jim Henson’s The Dark Crystal movie, posing briefly onscreen as the entrance to the hidden Valley of the Mystics .

The Scar is on a hiking trail leading to Malham Cove (featured below).  Definitely worth a visit. 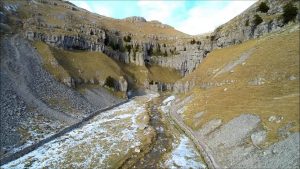 The 80-meter-tall, 300-meter-wide carboniferous limestone cliff. Malham Cove is one of the most popular scenic locations in all the Yorkshire Dales. Travel between the breath-taking views at both the top and bottom of the cliff is afforded on the western edge of the landmark by 400 irregular stone steps that are part of the Pennine Way.

Contained within the cliff is a 50,000-year-old complex of caves and tunnels that has scarcely been explored. These caves provide a multitude of avenues for water drainage from to bottom (for example, a stream that disappears at the top of the cliff is not at all connected to a stream that appears at the bottom, thanks to these numerous channels) and account for the lack of a waterfall at the site in the present day. The one remarkable exception happened on December 6, 2015, when the sheer volume of rain from Storm Desmond briefly turned Malham Cove into a waterfall once again.

Malham Cove is not only a sightseeing destination, though, as it is also popular with cave divers and provides several different ascent options to rock climbers of widely varying abilities. The limestone cliff and its environs are also home to peregrine falcons, little owls, martins, and jackdaws. The visually striking site has served as a filming location for a 1992 version of Wuthering Heights, Steve Coogan’s The Trip, and Harry Potter and the Deathly Hallows: Part 1. 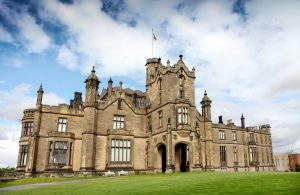 Is the ancestral home of Lord Mowbray, Segrave and Stourton. The home is rated a Grade I by English Heritage, making it one of the most important Gothic Revival homes in all of England.

The castle contains seven main reception rooms, 45 bedrooms, and 18 bathrooms. It also has its own chapel inside. The great hall, one of the most extraordinary rooms in the building, has ceilings that are 80 feet high. The room is decorated by complexly carved oak panelling and filled with stained glass windows. In the centre of the house, the great hall branches off into the drawing room, the blue and white ballroom, the library and other rooms. In the grounds of the castle, you will find an 18th-century stable block made of dark-coloured stones as well as a huge kitchen garden. There is so much to explore Allerton Castle is well worth a visit

The house is recognized by many as it was used for the exterior shots of the film The Secret Garden. The house was also used as a shooting location for the film 1920 and the television series Lost in Austen.  Great day out for all. 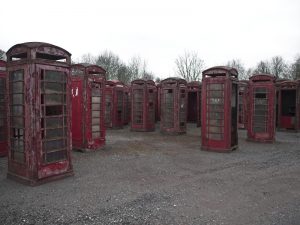 The public telephone boxes once lined the streets of the UK, these brightly coloured boxes were convenient, easy to spot and by the 1980’s over 73,000 were in use .With the advancement of technology,  by 1985, the telephone box had been deemed obsolete and the kiosks had to find new homes.  And find new homes they did. The iconic boxes still had many admirers who couldn’t bear to see the brightly coloured booths go to waste. Repurposing ventures included turning them into shower stalls in homes, mini libraries, and of course a wide array of art projects. Those that weren’t lucky enough to fall into the hands of creative fans were taken to rural storage areas, one of which is a small village in northern England called Carlton Miniott.  The rows and rows of rusted red telephone boxes which no longer ring may create a strikingly sad image but luckily these decommissioned symbols of Britain, as iconic as fish and chips or the Queen, have not been sent to die or decompose. Instead they are taken to ‘telephone box graveyards’ where they are lovingly rejuvenated.

If you happen to be near to Gallaber Park, you are more than welcome to pop in and have a look around our lovely holiday park – and if you’re really  lucky you may even catch a glimpse our visiting deer’s.

We would love to hear about your adventures around North Yorkshire, so please share them with us.

Great Family Days Out in and around Caernarfon