What a day it was!!  This blog is for anyone interested in hearing about our long day in the saddle and a big thank you to all those who sponsored and supported us along the way.

In truth, the journey began the evening before as we drove 60 plus miles to the start line in Abersoch!  A lovely evening was had in the caravan where we enjoyed Beth’s lasagne and Mari’s tiramisu washed down with a few beers and a bottle of wine whilst watching Love Island! Chris Beardo ensured all dishes were cleaned after his second, third and fourth helpings!

We turned in early,  though with it being blustery and warm, sleep wasn’t the best, especially for poor Beardo who was sharing a room with Stuart Smith’s plug-in cool box, which as well as kicking out a lot of hot air, was also making a lot of noise!

3.00am. All the iPhone alarms kick in at the same time, though not a lot of enthusiasm to get up.  Coffee, banana, breakfast bar. Shower, change, sort out bike and bottles. Warm and windy outside.

4.15am. Cyclists are ready to go, and we assemble for photoshoot at the start line at the entrance to Green Pastures.   Shame our driver didn’t know how to operate a flash as all the cyclists started getting narky about the length of time it was taking to take a photo!!

First leg. Green Pastures to Caernarfon Castle. First, 30 miles leg was going well and spirits were high until we hit the start of what turned out to be an all-day battle….. horrendous headwinds and turbulent winds coming over the hills near Trefor.  The views over to Anglesey at 5am were stunning but the wind was horrific. I’m not going to lie, but I did have thoughts of jacking it in!!

We did have some fun and games though with the sprints to get to the front of the pack for the constant picture opportunities from our driver but once the wind set in the fun and games were over and we started to work together for the long day ahead.

Second Leg. Caernarfon Castle to Tides, Llanddulas.  At this point, our driver informed us that nothing in Caernarfon is open at 5.45am, well Macdonald’s that is! After pictures in front of the castle and a quick snack, we headed back into the wind and the next 30 odd mile leg to Llanddulas.  Sections of this ride were getting harder as the wind was really starting to pick up. We made safe passage and were cheered on by Andy’s family who came to the roadside in Mochdre and we were welcomed by a host of people at Tides Café/Bistro at the Beach Caravan Park for a welcome buffet breakfast. Thank you to the staff for coming in early, the breakfast went down well, Beardo managed to get into seconds before some of us had even got up for firsts!!

More pictures of the team, motivational speech from our coach/captain/mentor Gareth Hughes (Gareth Hughes & Co Accountants) and refuelling of bottles and snacks for next part of the ride and we are on our way again. 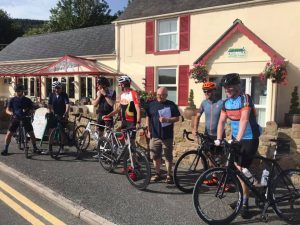 Third Leg. The Beach Caravan Park to Seacombe Ferry, 50+ miles. This section was always going to be interesting as we knew there was a time constraint involved having to be at the ferry for 12.15pm.  The mood on the road quickly changed, after a hearty breakfast and a great send-off from friends and family we soon arrived into the morning traffic on the coast road to Queensferry. This was made doubly horrific due to what felt like 100 mile an hour headwinds and the worst road surfacing in the world!

The blue bridge in Shotton not only marked the end of the hell that was the coastal road but also the half-way point of our journey. It was from here that we had to negotiate our way across the Wirral and across every kind of terrain imaginable.  Luckily it was dry otherwise this stretch of the journey could have been really interesting!  With water bottles running dry and time running out to make the ferry, tempers started to fray with the support crew coming in for some stick.  Fortunately for us, we made the ferry with just 10 minutes to spare and luckily the support crew turned up 5 minutes later with much-needed water and our lunches as well as an additional sandwich for Beardo!

Lessons learned so far on the ride? It would have been worthwhile doing a recce of the route before we set off!!

Lunch was enjoyed on the ferry as well as much needed rest both from the bike and the sun!!

Fourth Leg. We decided in the afternoon to break the ride up a little more due to the sun and the wind. Liverpool ferry port to MacDonald’s Formby, 13 miles. After negotiating our way out of the city and letting Phil and Andy argue it out over the route we finally arrived onto better roads out of Crosby and into the countryside. The pit stop at Macdonald’s was more as a convenience stop as well as to replenish the ever emptying water bottles. 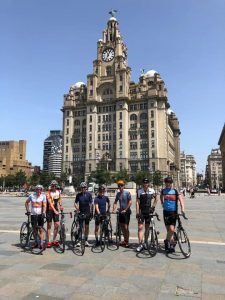 Fifth Leg. Formby to Preston, 30 miles. Why we decided to go north to Southport and along to Preston, I don’t know!  The roads were busy, we were abused by every driver who past us, the weather was hot, peaking at 29degrees, and the wind was as delightful as it had been all day, hard in the face. With Beardo now expressing a desire for ice cream, it seemed all any of us could now think about was ice cream!! It is fair to say the roads around Southport and Preston weren’t the best due to the time of day with schools finishing and the weekend rush hour traffic starting to kick in. We arrived at the next stop in one piece. Beardo had his ice cream, in fact, we all did, and it was definitely one of the nicest ice creams I have ever had!!

Sixth Leg. Preston to Clitheroe, 16 miles. Still, 30 odd miles to go, we all now sensed that the finish wasn’t far, just a ‘club ride to Betws and back’ I kept telling myself.! Chris Darbey ‘falling off ‘at a standstill at a junction was a highlight as we again set off. The roads began nicely, lovely country roads, nice and quiet, perfect really. This was then followed by a stretch on the busy A59 which was far from ideal as we were overtaken by more wagons and coaches than I care to imagine. Still, like as ever, we made it to the next stop in one piece!

Last Leg. Clitheroe to Gallaber Park, 15 miles. The final straight as such, though if only the road was straight, and if only the road was flat!.  The wind thankfully had eased off and the searing heat had cooled.   It’s fair to say these were the most cycle-friendly roads we had been on all day, and if we had not already cycled 170 miles, I am sure we would have all enjoyed a proper cycle along these lanes and the local area.

We finally crossed the ‘finish line’ just after 7.00pm with a welcoming committee at the park and the terrace of the bar full of people enjoying the early evening sunshine with a pint in hand.

I’d like to say the first pint didn’t touch the sides but to be honest I was that shattered it was quite a struggle. The second, third and many after weren’t so much of a struggle!!

I would like to thank the riders on the day, Chris Darbey, Andy Bunce, Stuart Smith, Andy Kiddell, Chris Beardmore and Phil Arundale. Safe to say, safety in numbers and with the conditions being as they were a shared effort by all.

Liz Jones and Alison Mays for their help with Social Media and fundraising.

But a big thank you to all who sponsored us and helped us raise money (so far £7,652) for our chosen charity, Hope House and Ty Gobaith. If you would like to donate please click on the link below: